Flow control is one of the important aspects of any programming language. In this article, we will learn to iterate over list elements using different variations of for loop in python.

The for loop in Python is used to iterate over iterable objects or a sequence (list, tuple, string). Iterating over a sequence is called traversal. 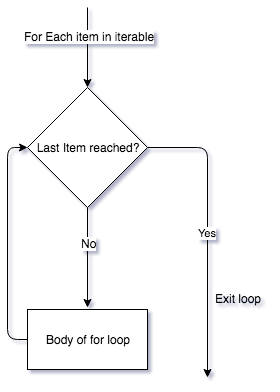 Here, an item is the variable that takes the value of the item inside the iterable on each iteration. Loop continues until we reach the last item in the sequence. The body of for loop is separated from the rest of the code using indentation.

If you have observed the above code example properly then you should have noticed that we have used one function range. lets have a look at that as well.

Range is used to generate a sequence of numbers. The range(10) will generate numbers from 0 to 9. Syntax for range function is:

This function does not store all the values in memory, it would be inefficient. So it remembers the start, stop, step size and generates the next number on the go. That makes this function to be memory efficient.

We can utilize the range function as below to iterate over list of string:

for loop with else

One variation of for loop to use it with else block. The else part will be executed if there is no more items to be iterable.

Break statement can be used to break a for loop. In such case, the else part is ignored.

The syntax is as below:

That't it for now. We will see while loop in the next article.