The JDK 1.5 Executor framework is a combination of various Executor interfaces and Executors utility class to provide a thread pool feature in Java.

In server side programming, Thread pool is an important concept to maintain scalability, robustness, and stability of the system.

Thread pool is a pool of worker threads, which is ready to perform any task given to them, mostly in the form of implementation of Runnable or Callable interface.

Why do we need ThreadPool ?

In a large scale web application, if only one thread / process is used to process all client requests, then only one client can access the server at a time.  In order to support large number of clients, we need to use one thread per request paradigm i.e. we need to use separate threads to process each client request. But this require new threads to be created, when request arrived.

Creating a thread in java is a very expensive process which includes memory overhead. So, it’s a good idea if we can re-use these threads once created, to run our future runnables. Thread pool solves this problem for us. It creates Thread and manages them. Instead of creating Thread and discarding them once task is done, thread-pool reuses threads in form of worker thread.

Java 1.5 introduced Thread pool in Java in the form of Executor framework, which allows Java programmer to decouple submission of a task to execution of the task. 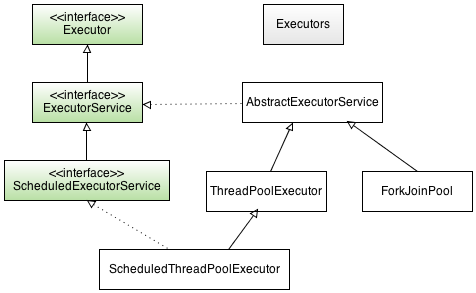 Executor interface is the core of executor framework. It has two sub interfaces ExecutorService and ScheduledExecutorService.  An object of type Executor can execute Runnable and Callable tasks.

Using an Executor it is possible to remove the manual creation of threads to execute a command. Given any Runnable implementation, like the following:

The following code with an explicit Thread creation:

can be replaced with the following code that instead uses an Executor:

execute() method Executes the given command or Runnable task at some time in the future. The command may execute in a new thread, in a pooled thread, or in the calling thread, at the discretion of the Executor implementation.

Upon termination, an executor has no tasks actively executing, no tasks awaiting execution, and no new tasks can be submitted.  An unused ExecutorService should be shut down to allow reclamation of its resources.

In this example a thread pool of two threads are created, and 6 runnable tasks are executed. These 6 tasks will be executed using only these 2 threads from the thread pool, new thread won't be created for each of the 6 tasks. It can be verified from the thread name in the output.

Benefits of Using the Thread Pool

Limitations of Using the Thread Pool

While the thread pool is a powerful mechanism for structuring multithreaded applications, it is not without risk such as pool-related deadlock, resource thrashing and thread leakage.