What is C language? Why C is called mother language?

Hello Developers, In this article, I have explained why it's a good choice to learn C language and also many things regarding it. Firstly, we will learn, What is C language? Why do we learn C language? I have also explained some important features of it which played an important role in calling C as mother language of all other programming languages. Now, without further ado, let's dive right into it. 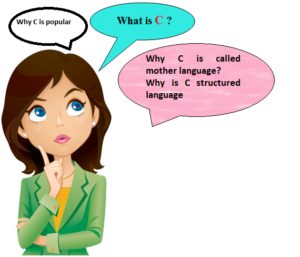 What is C Language?

Who has developed C Language?

C is general purpose programming language which is developed by Dennis Ritchie in 1972 Bell Laboratories of  AT&T. AT&T stands for American Telephone & Telegraph. Bell Laboratories is an industrial research and scientific development company.

Which Programming Languages were replaced by C?

Many popular programming languages of that time were replaced by C language and these languages were ALGOL, BCPL & B.  Here is the full Evolution of C Programming Language:

Why C is So Popular?

C is reliable, simple and easy to use. It is a procedural, structured and mid-level programming language. Now some questions arise in our mind such as what is procedural and what is structured.

What is Procedural language?

A procedural language is a type of computer programming language that specifies a series of well-structured steps to solve the problem. It contains a systematic order of statements, functions and commands to complete a computational task or program.

In other words, It is a way to solve a problem through simple steps. It is also known as function. Procedural language breaks a program into functions and data structures. C is a procedural language that's why variables and function prototypes must be declared before being used in the program.

What is Structured Language?

Structured language breaks the program into small parts and solves each part individually. Structured programming is a subset of procedural programming language. It is also known as modular programming. Structure programming makes use of the top-down model.

Why is C mid-Level Language?

Why C Language is mother Of all other Language?

C is one of the most widely used programming languages of all time, and C compilers are available for the majority of available computer architectures and operating systems. The C language has formed the basis for many languages including C++, Java, JavaScript, Go, Rust, Limbo, LPC, C#, PHP, Python, Perl, Verilog, and C-shell.

C language had provided many new concepts for the programming language like variables, data types, loops, array, function, file handling, dynamic memory allocation, pointers and most of these concepts are used in many modern languages like C++, Java, C#.

Most popular Linux Kernel and most UNIX utilities, what you would call the operating system are written in C.

Some Other Important Points about C Language