How does HashMap work internally in Java?

How does HashMap work internally in java is one of the most asked core java interview questions. Most of the candidates do not give the satisfactory explanation. This question shows that candidate has good knowledge of Collection. So this question should be your TO-DO list before appearing for the interview.

There are four things we should know about HashMap before going into the internals of how does HashMap work in Java.

HashMap works on the principal of hashing. Hashing is the process of indexing and retrieving element (data) in a data structure to provide faster way of finding the element using the hash key.

HashMap maintains an array of buckets. Each bucket is a linkedlist of a private static inner class called an Entry Class which encapsulates the key-value pairs.

Bucket term used here is actually an index of array, that array is called table in HashMap implementation. Thus table[0] is referred as bucket0, table[1] as bucket1 and so on.

Hashcodes are typically used to increase the performance of large collections of data.

Imagine a set of buckets lined up on the floor. Someone hands you a piece of paper with movie name on it. You take the movie name and calculate an integer code(i.e. Hashcode) for each name by calculating total number of characters in that name.

Imagine that each bucket represents a different code number (Hashcode) and place the piece of paper into corresponding bucket according to its Hashcode value.

Here, movie Gandhi has 6 letters, so we will put it into the Bucket with value 6.   has 7 letters, so it will be placed into bucket and so on. 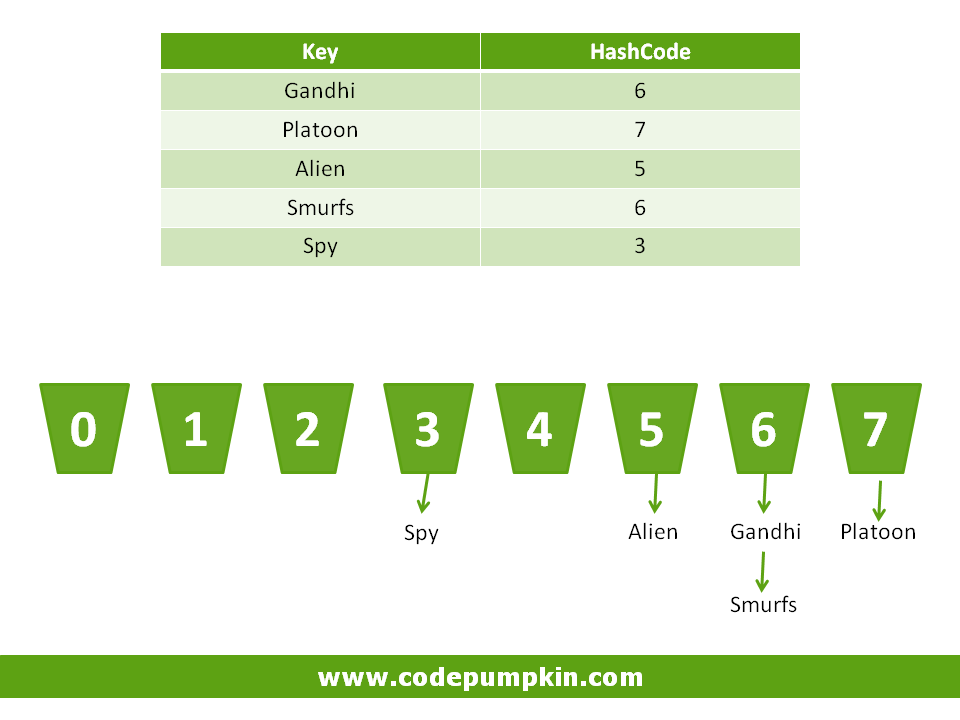 Now imagine that someone comes up and shows you a name and says, "Please retrieve the piece of paper that matches this name." So you look at the name they show you, and run the same hashcode-generating algorithm. The hashcode tells you in which bucket you should look to find the name.

In above example, you might have noticed that two different names may result in the same value. Such situation is known as Hashing Collision.

For example, the movie names Gandhi and Smurfs have the same number of letters, so the hashcode will be identical both names. That's acceptable, but it means that when someone asks you for the Gandhi piece of paper, you'll still have to search through the target bucket reading each name until we find Gandhi rather than Smurfs.

The hashcode tells you only about which bucket to go into, but not how to locate the name once we're in that bucket. In such cases, equals()  method is used to locate the exact match.

So for efficiency, your goal is to have the papers distributed as evenly as possible across all buckets. Ideally, you should have just one name per bucket so that when someone asks for a paper you can simply calculate the hashcode and just grab the one paper from the correct bucket (without having to go flipping through different papers in that bucket until you locate the exact one you're looking for).

The least efficient hashcode generator returns the same hashcode for all the movie  so that all the papers lands in the same bucket while the others buckets remain empty.

In real-life hashing, it’s common to have more than one entry in a bucket. Hashing retrieval is a two-step process.

In case of null Key

As we know that HashMap also allows null, though there can only be one null key in HashMap. While storing the Entry object HashMap implementation checks if the key is null, in case key it is null, it always maps it to bucket 0 as hash is not calculated for null keys.

How get() method works internally?

Though HashMap implementation provides constant time performance O(1) for get() and put() method, but that is in the ideal case when the Hash function distributes the objects evenly among the buckets.

The performance may worsen in the case hashCode() is not proper and there are lots of hash collisions. As we know that in case of hash collision entry objects are stored as a node in a linked-list and equals() method is used to compare keys. That comparison to find the correct key within a linked-list is a linear operation so in a worst case scenario the complexity becomes O(n).