Observer Design Pattern is one of the Behavioral Design Pattern. Observer design pattern is useful when you are interested in the state of an object and want to get notified whenever there is any change.

GoF Definition : The Observer Design Pattern defines a one-to-many dependency between objects so that when one object changes state, all of its dependents are notified and updated automatically.

The object which is being watched is called the subject. The objects which are watching the state changes are called observers or listeners.

In this pattern, there are many observers (objects) which are observing a particular subject (object). Observers are basically interested and want to be notified when there is a change made inside that subject. So, they register themselves to that subject. When they lose interest in the subject they simply unregister from the subject. Sometimes this model is also referred to as the Publisher-Subscriber model.

Twitter Follow button:  We can think about a celebrity who has many followers on twitter. Each of these followers wants to get all the latest updates of his/her favorite celebrity. So, he/she can follow the celebrity as long as his/her interest persists. When he loses interest, he simply stops following that celebrity. Here we can think of the follower as an observer and the celebrity as a subject. 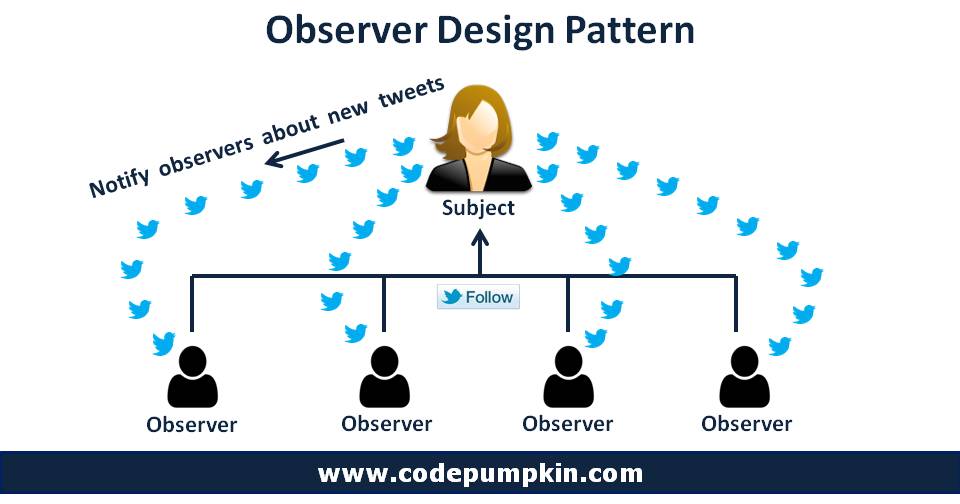 However it’s not widely used because the implementation is really simple and most of the times we don’t want to end up extending a class just for implementing Observer pattern as java doesn't provide multiple inheritance in classes.

I prefer having my own Subject and Observer interface and here is my java code implementation of Observer Design Pattern.

The most popular use of Observer pattern is in Model View Controller (MVC) architectural pattern.

Main issue with Observer pattern is that it can cause memory leaks. The subject holds a strong reference to observers. If observers are not de-registered in time, it can lead to memory leak.

Existing Implementation in JDK and J2EE