interface java is a mechanism to achieve abstraction and it is one of the most discussed in entry and java developer interviews. In our previous articles, we have seen various interface related topics like Interface Evolution in Java, Difference between interface and abstract class and Functional interface in  8.

In this post, we are going to discuss another special type of interfaces i.e. Marker interface. Here is the list of topics which we will cover in this article. 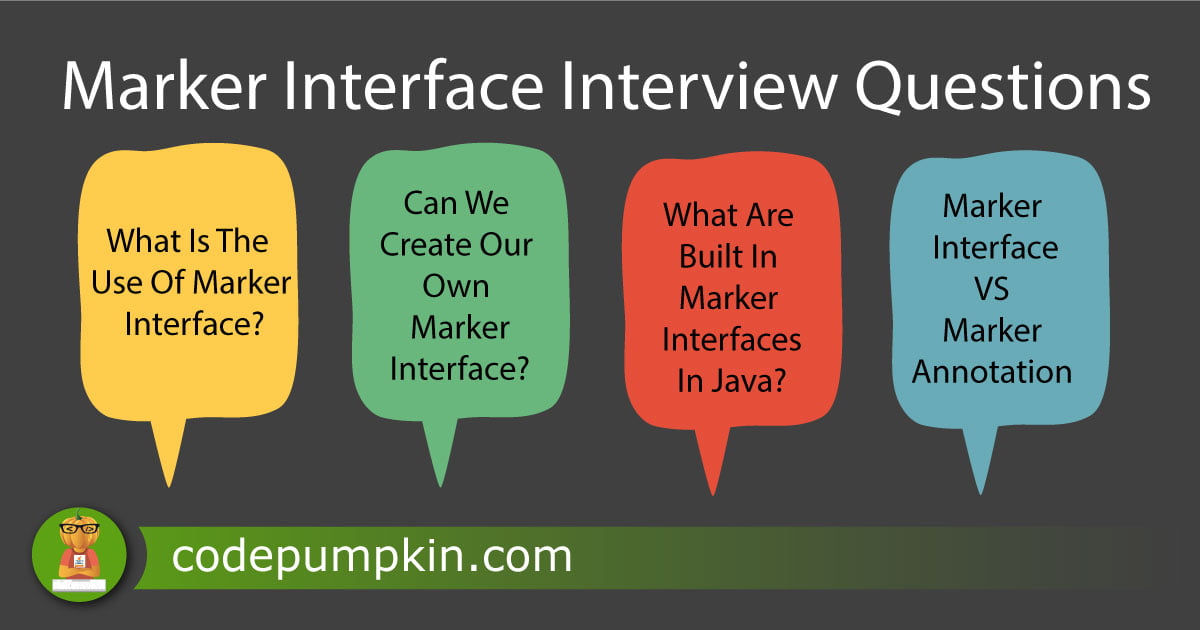 What is Marker interface in Java?

Marker interface is the interface which doesn't contain any field or method. It is just an empty interface.

What is the use of marker interface?

If  doesn't have any methods or field, then what is the use of it?

Well. its name itself suggests that it is used for marking something, isn't it? It is used to convey to the JVM or compiler that all the classes, which implements particular marker interface, have some specific .

They are also known as tag interfaces since they tag all the derived classes into a category based on their purpose.

In other words, just by marking a class Serializable we can make it eligible for Serialization. Amazing, isn't it?

What are marker interfaces?

There are four main in-built marker interfaces in . Here is the quick summary of them.

Serializability of a class is enabled by the class implementing the java.io.Serializable interface.

clone() may be called. Invoking Object's clone method on an instance that does not implement Cloneable results in the CloneNotSupportedException thrown.

It is used by List implementations to indicate that they support fast (generally constant time) random access.

It serves to identify interfaces whose methods may be invoked from a non-local virtual machine.

Can we create our Own Marker Interface? If yes, how?

Yes, We can create our own marker interface just by creating a blank interface. In our code, we can use it as in method arguments or use it instanceof to execute code based on of object. For Example,

Then you can have taking  MyMarkerInterface instance:

What are the Problems with marker interfaces?

One of the common with marker interface is that when a class implements them, all of its subclass by default inherits it. For Example,

We need to handle such exceptional cases by throwing exceptions from child classes.

ca the same with Annotations?

Refer Item 37: Use marker interfaces to define types of Joshua Bloch's Effective Java to know more use cases and differences between Marker interface and marker annotations.