CyclicBarrier  was introduced in Java 5 along with other concurrent classes like CountDownLatch, ConcurrentHashMap, CopyOnWriteArrayList, BlockingQueue within java.util.Concurrent package.

There are scenarios in concurrent programming when you want set of threads to wait for each other at a common point until all threads in the set have reached that common point.

The java.util.concurrent.CyclicBarrier class is a barrier that all threads must wait at, until all threads reach it, before any of the threads can continue.

The barrier is called cyclic because it can be re-used after the waiting threads are released. 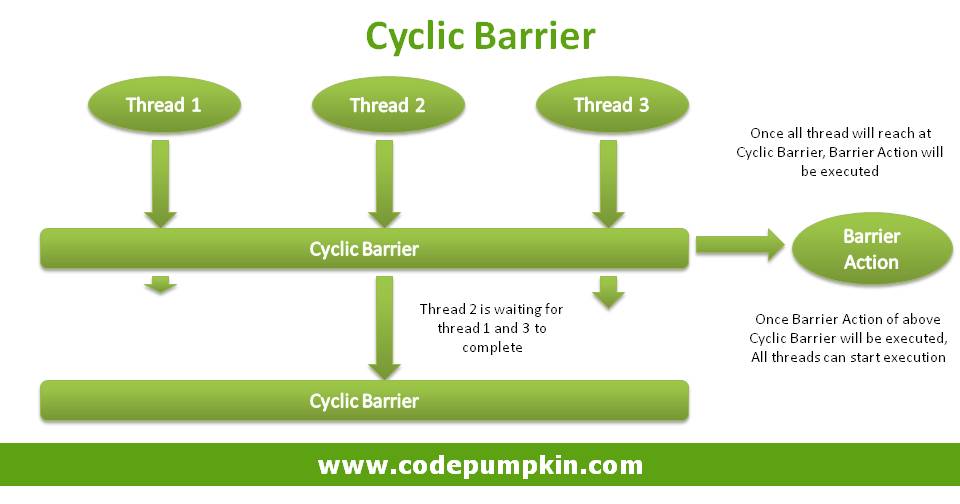 You can implement the same functionality using wait() & Notify() mechanism but it requires lot of code and getting it write in first attempt is tricky,  With CyclicBarrier it can  be done in just few lines.

Here is an easy example to remember its behavior: "4 bikers have started driving from Manali to Leh. As all of them are driving at different speed, they have decided some checkpoints in their route. After reaching to first checkpoint, everybody waits for others to reach that checkpoint. Once all 4 arrives, they will refill the petrol tanks and resume their rides and drive until their next checkpoint. "

In above example, bikers are worker threads or parties. checkpoint is barrier. Once all bikers reaches the checkpoint/barrier they will refill the petrol (barrierAction) and reset the barrier.

Lets implement above situation using CyclicBarrier. For better understanding of this Java program, please read steps mentioned next to the program.

Steps To Use CyclicBarrier In Your Java Program

CyclicBarrier class has following two constructors. Both of them create a new CyclicBarrier object with the total number of parties / threads which wait for each other after reaching the Barrier.

Here parties parameter signifies the number of threads that must invoke await() after reaching the barrier i.e. Biker threads

barrierAction specifies a thread that will be executed when the barrier is reached i.e. Refilling Petrol

4. Call await() method at each barrier/checkpoint in thread's run() method.

Once all the specified threads have called await() method, they can resume operation.

In the second form, it waits until all parties have invoked await() on this barrier, or the specified waiting time elapses.

await() method returns int which is the arrival index of the current thread.

If the current thread is not the last to arrive then it is disabled for thread scheduling purposes and lies dormant until one of the following things happens:

Though both CountDownLatch and CyclicBarrier are used as a synchronization aid that allows one or more threads to wait but there are certain differences between them that you should know. Here is our post CountDownLatch Vs CyclicBarrier | Java Concurrency Utilities where we have explained each difference in detail